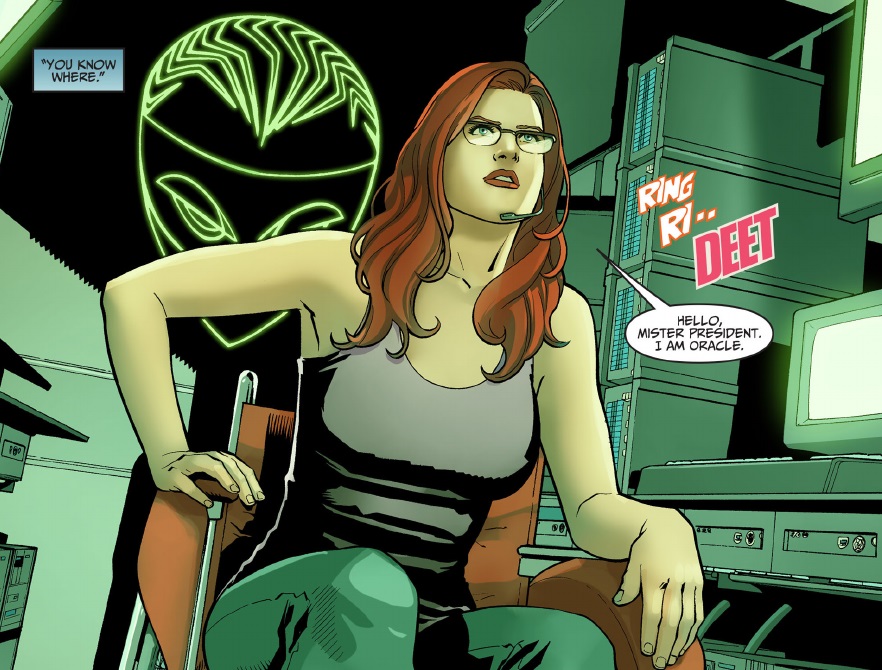 The upcoming Batgirl movie is presumably about Barbara, not either Cass or Steph, which disappoints me, and not just because of my reservations about Joss Whedon,  but because as much as Batgirl is Barbara’s legacy, Oracle is who she is, or should be, now.

I adore Babs, I do, but I’ve always found that her character works best as Oracle, not Batgirl. The Killing Joke was a vile, horrifically misogynistic comic, and it was never Alan Moore’s intention for this to be Barbara’s growth from essentially Batman’s sidekick to his equal partner. That being said, if it weren’t for that, we wouldn’t have Oracle, the grown woman that’s an integral member of the Birds of Prey and that mentors the girls taking up her Batgirl legacy, We wouldn’t have a brilliant, badass, disabled heroine overcoming her trauma to keep fighting anyway, one that doesn’t need a mask or a costume, just herself and her brain and her confidence. That character came about as a result of people trying to figure out how to give Barbara her agency back, to make her more than a victim targeted not for who she is, but to hurt the male characters in her life. Yeah, I wish the sexist story behind her paralysis didn’t exist. But I wouldn’t trade Oracle Barbara for anything.

The timeline and story in BvS would make the most sense if Barbara were already paralyzed at that point, and perhaps not yet Oracle. Unless the Batgirl movie is set a few years in the past, the connectivity of the movies, which has so far been very solid and well crafted, starts to get shaky. Regardless of when it takes place, I expect that we’ll be getting a live action interpretation of The Killing Joke. The shock value made it one of the most famous stories involving Babs, even though she wasn’t the main character. Whedon’s history suggests that it would be the story he’d be most interested in adapting. I’d hoped when the animated movie came out that the  writers would fix the issues I had with the comic and make it about Barbara, and about her overcoming the trauma in her life, but they didn’t. I don’t have high hopes that the live action movie will, either. It probably won’t be coming out for at least another three years, but I’ve already begun to brace myself for the worst.

What I’d love to see – rather than the gratuitous gendered violence, gross fetishization of abuse, and brutality towards a female hero, not for her own character development and story, but to further that of male characters that were so present in the comic – is a story about Barbara mentoring Cass as Cass becomes Batgirl. I want Babs to have already been there, done that, because she is more than her traumatic experiences and she doesn’t need to be able to walk to be a hero. Barbara has so much to contribute, and we don’t need to see her shot in the spine for her to mentor the youngest generation of heroes. Having her as Oracle already would help flesh out the lived in feeling of the DCEU, that these characters existed before the movies and a lot has gone on that we haven’t seen, as well as enriching this version of the Bat Family.

I know this won’t be what we get. I’m not sure if DC has confirmed the movie is centred around Barbara, but I’d be incredibly surprised it if wasn’t. I doubt either Cass or Steph will be in it at all. I very much doubt that it’ll be the Batgirl movie I want to see. But if we’re lucky…it won’t be a Killing Joke story.

2 thoughts on “Batgirl, Oracle, and Barbara”