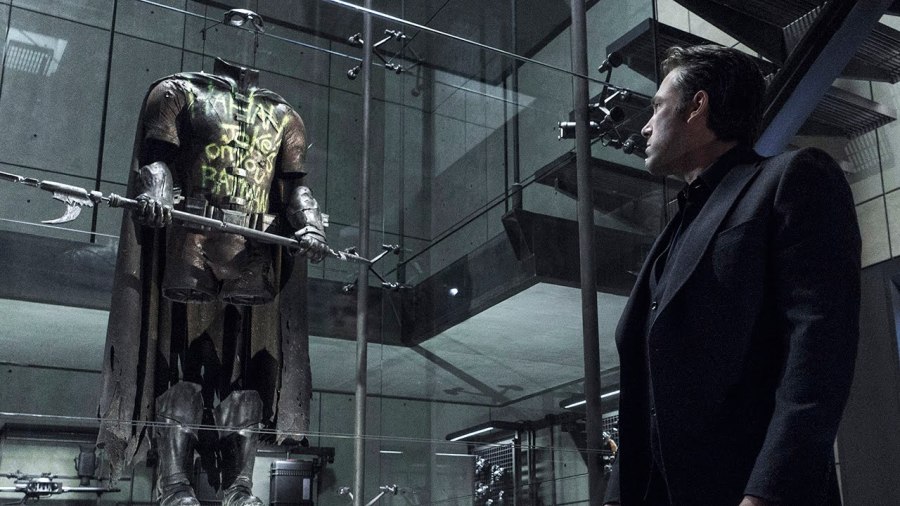 Zack Snyder commented on a Vero post today. This is nothing unusual. He spends a lot of time on Vero, and he comments on a lot of posts. But this time, he was saying that the dead Robin in Batman v Superman – the one pretty much everyone assumed was Jason, even though I do remember some debate based on that one picture of a gravestone labelled Richard Grayson – was in fact Dick, not Jason. This prompted Twitter freaking out. I…think that’s an overreaction.

As I’ve pointed out countless times, I adore Dick Grayson. He’s my favourite comic book character of all time, and the very first comic I read was his miniseries from 1995. I love him as Robin, I love him as Nightwing, and I love him as Batman. So believe me when I say…what I’m going to say has absolutely nothing to do with me being a “Snyder fanboy”. I adore Zack Snyder. I think he’s an awesome storyteller. But my love for Dick Grayson goes back a long way. I’ve loved his character since the same year 300 came out. Like all my posts about him illustrate, I’m very protective of how he’s interpreted. So my defending Snyder’s creative choices – even ones that I’m unsure about – has nothing to do with being a blind follower and everything to do with how Snyder has given me reasons to trust him.

I saw several Tweets along the lines of “having Dick be the dead Robin would have been a terrible idea”. To those, I just have to laugh, because you know something? Snyder has demonstrated that he knows how to make something incredible out of “terrible ideas”.

I do not like Frank Miller. I think The Dark Knight Returns is a bad comic that really doesn’t have many redeeming qualities in it. My instinct would have been to say that adapting it would have been a terrible idea. But that’s what Snyder did when he made Batman v Superman, and that was awesome. I love that movie with all my heart. There is no comic book movie on that level of incredible. And that’s because Snyder thinks things through. He creates nuanced takes. He found the good in The Dark Knight Returns and turned it from something I consider kind of terrible to something beautiful. That he could do that is huge. As it is, it doesn’t really matter to whom the Robin suit in Batman v Superman belonged, just that a loss had a major impact on Bruce. But I absolutely believe Snyder could have made something unique and compelling out of making it explicitly Dick rather than Jason.

Another comment I saw – that a lot of people were upset about – was about how it makes so much sense that it was Dick and not Jason that made Bruce so reclusive and angry in Batman v Superman. People often take comments about Bruce’s love for Dick being special as attacks on the other members of the Batfamily, but that’s not it. Of course Bruce has the capacity to love multiple people. He has room in his heart for all of his children and all of Gotham. That doesn’t mean that he and Dick don’t have a unique and beautiful relationship. Dick is his first son. His first partner. Dick saved Bruce from a dark path. Bruce once kept a whole universe from getting destroyed because Dick was in it. Dick has been there through everything. As a character, he predates Alfred, Barbara, Jason, Selina. He’s Bruce’s most valued partner and the one thing he did right. He’s utterly crucial.

One of the reasons Jason was so upset that Bruce didn’t kill the Joker was because he thought he would have done it had it been Dick who died. And there is some basis for that – Bruce completely flipped out and tried to strangle Lex during Forever Evil when he thought Lex had killed Dick. In Infinite Crisis, he grabbed a gun and threatened to shoot alternate universe Lex because of the same reason. The only reason he didn’t in both those cases was because Dick wasn’t actually dead. It’s a pattern of behaviour in the comics, carried through different writers, that Bruce probably would kill someone for Dick. So canonically, there could be that basis for why Snyder wanted it to be Dick and not Jason. But I don’t think that’s the real point. It’s not about what Dick’s place in the birth order means for his relationship with Bruce, but about what it means for the entire concept of the Batfamily.

Without Dick, there wouldn’t have been any other Robins. Tim could come after Jason because Dick already set the precedent for a success, for illustrating why Batman needs a Robin. But there’s no way in hell that Jason would have come along after Dick if Dick died instead. And without Jason – without the rest of the Batfamily – there would be no one to hold Bruce back and keep him from a dark path. So of course Bruce would be alone ten years after losing his partner. Of course he would be hugely more cynical and unwilling to work with other people. Of course feeling threatened by Superman could tip him into being ready to kill. That’s why Robin matters.

As someone that loves Dick, loves how he’s the gold standard that all his successors feel like they need to live up to, loves that he’s the member of the Batfamily most naturally suited to the job they all chose, and loves that Bruce considers him his greatest success, it upsets me to think that in the movies, that’s not the case and that he’s the Robin Bruce failed to save instead. But it also makes a huge amount of sense in this universe, even down to the simple matter of explaining where all the other members of the family were during the movie.

Is Jason best known for being killed by the Joker? Yeah. But we’re talking about superhero comics and their adaptations. Characters die and come back all the time. Killing a different Robin isn’t the same as taking something that’s fundamentally part of Jason’s story and not anyone else’s. And beyond that, movies are an adaptation. Changes are inevitable. It’s more important to me that they remain true to the spirit of the material than any particular storyline. And Zack Snyder has demonstrated that he has a lot of respect for the comics.

I wouldn’t want Dick to be the dead Robin, even though it does make a lot of sense and I know Snyder could make something awesome out of it that would, in all likelihood, respect Dick as a character, just because I love the Batfamily, I love Dick’s relationships with all kinds of different heroes, and I love how he’s the heart of the DCU. If he made a movie further exploring this, I’d go see it, and I’d be excited because it would be him making it, but I wouldn’t feel the same level of excitement as I do about other superhero movies, just because I get most excited about the other members of the Batfamily when they’re interacting with each other, especially with Dick. I wouldn’t be nearly excited to see any of them without that dynamic and a lot of emphasis on the importance of the Robin legacy and Bruce and Dick’s relationship. I really don’t care about Carrie Kelley, who Snyder said it a later comment, he’d have brought in (He said that Dick would have stayed dead until Carrie. I didn’t quite know what that meant – was that just referring to there being no Robin until Carrie, or was he saying that Dick himself would have come back to life after Carrie was introduced?).

And honestly, none of this really matters. It was left open ended at the time, presumably for the director of the Batsolo to decide how they want to handle it. For all we know, Matt Reeves won’t handle it at all. But I think it’s crazy to have such rigid opinions on how a movie that we probably won’t see would have been based on a one word comment. There are a million ways that story could go. I’m not saying I’d be thrilled about this deviation from the comics, and it might not have been what I wanted, but Zack Snyder has demonstrated that he makes purposeful changes. He doesn’t just change what’s in the source material for no reason. He cares about these characters. I trust that he’d give us an interesting story.