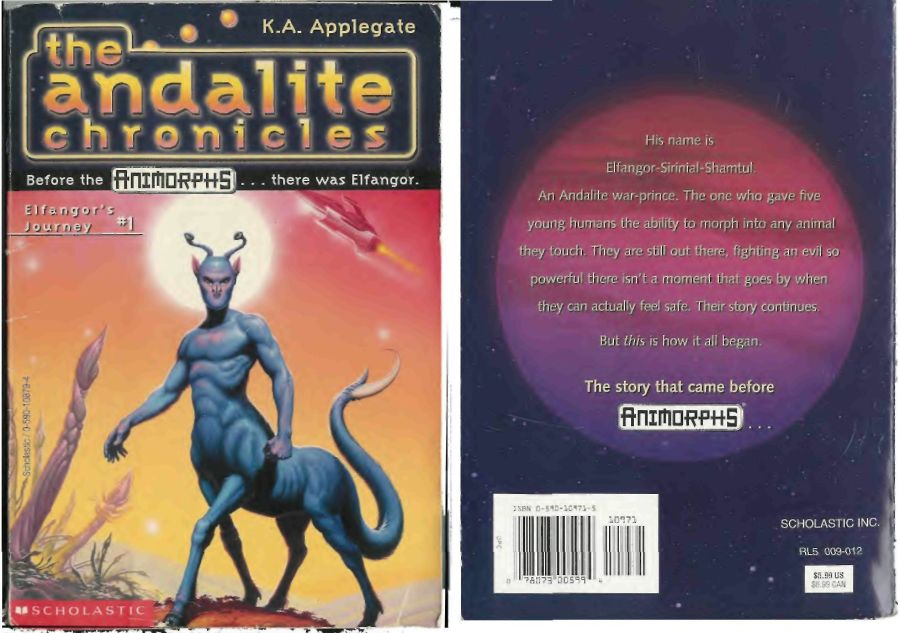 Animorphs was ever present when I was growing up. They were there in every classroom. Every library, both school and public. They weren’t even out of print yet, because I distinctly remember buying book 4 at Chaptersaside. This is pretty standard for children’s books. I mean, it’s the same thing as Goosebumps or Magic School Bus or Nancy Drew or any number of other series. Despite that, finding copies was really hard. Libraries always had several of them, sure, but never the ones you were looking for. They had, like, books 5, 11, 16, 29, 34, and 41, with none of the others – and no, that’s not me picking random numbers. Those are the Animorphs books I remember being the most in circulation. I don’t think I ever saw a library without 5, but finding 53? Forget it!

Normally, that’s okay. With a lot of children’s books, it really doesn’t matter in what order you read them. Take Nancy Drew. It had no long run plot arcs whatsoever. Each book is self contained. All you need to know is that Nancy is an amateur detective, her friends are Bess and George, and she goes around solving crimes. Those facts are reiterated in every book, and even if they weren’t, it’d be obvious, so there’s absolutely no reason why you’d have to start at the first book and work your way through. I never read  Goosebumps, but the impression I got was that it’s similar. Animorphs, though? That’s unique.

Animorphs is usually episodic. Sure. And pretty much every book gives a recap of the premise and makes sure you know who all the characters are, so most of them will make sense if you read them out of order. But there’s also very much a running plot – or maybe plot isn’t the right idea so much as theme. Throughout the entire series, the focus is on how the Animorphs are dealing with the Yeerks. And there is a lot of character development there. It’s so subtle that you might not even realize it at first – but then, you’ll read a situation that mirrors one from twenty books earlier, and the characters will react in such a different way, that you’ll think, holy shit. You do not get the full force of that if you read them out of order.

Sure, it’ll probably make sense if you don’t. But if you don’t, you’ll miss a lot. If you’re reading the series out of order, you miss the development of these kids from wide eyed idealists being like, “oh, we can hold them off until the Andalites get here!” to hardened veterans that know in their bones “if the Andalites come, it won’t be to help us”. You miss Rachel going from a thirteen year old that gets a thrill out of gymnastics to a genuinely terrifying adrenaline junkie that gets off on violence. You miss Jake going from the thoroughly average kid that ends up in charge pretty much because he’s the one that everyone knows and likes to the teenage military commander of the entire planet that sends other kids to die without blinking. Unfortunately…the format of the series made it almost impossible for members of the target audience to get a hold of them all.

Don’t get me wrong – I’m a believer that the structure of the series was hugely beneficial when it comes to telling the story. Applegate’s major strength is how she can pack in the full gamut of human emotion in just over a hundred pages, and the length of the series helped contribute to the impression of a long time passing, as well as helped the slow character development. Fewer, longer books just wouldn’t have had the same effect. However. This was terrible for the reader. Finding the books was hard! I know of at least two people that never read them all, not because they weren’t interested, but because they couldn’t find them, and didn’t know what they’d read and what they hadn’t. Today, you can get them all as ebooks. If there are kids reading them today, they can find them without too much hassle…but the Barnes and Noble website lists each book as four dollars. There are 62 books. That comes out to a lot of money!

It’s an awesome series. I love it with all my heart, as can be evidenced by all my posts tagged Animorphs. I will never not beg people to read them. But wow, was the format a pain for readers.

Aside: I think my memory of the timeline is a bit skewed, because I always say I’ve been a fan since I was eight, but I don’t think the books were still in print at that point, and I feel like I was younger when I bought that book. Maybe eight was when I finally read all of them. Never mind.

One thought on “The Troubles Of Format: Why The Conventions Of Children’s Literature Worked Against ‘Animorphs’”