What’s a girl to do in a time when everyone’s supposed to be self isolating as much as possible, and after that, when there’s a stay a home order? It seems…food. Here are some of the many things I’ve been making in the past month or so.

We begin at the very beginning of self isolation, when the staying at home was a little bit more casual – you know, before it became mandatory and everywhere started running out of paper products. At this point, food hadn’t really been very appealing to me for a while, so I was at the point of needing things that were easy to eat and boldly flavoured. So I made some pseudo-shakshuka. I did not have the patience to poach the egg, at all, so I fried it and put it on top of the tomato sauce and tossed some goat cheese into the mix. I cheated a bit by using tomato paste instead of just cooking down the tomatoes for however long it took, but I think it still tuned out pretty well!

You know when you finish most of a box of pasta, then have tiny quantities left of several different ones that aren’t enough individually to make an entire meal? I used the remainder of a couple boxes to make pasta salad! Some celery, red onion, half a tomato, and a whole lot of pesto and balsamic vinegar! Does it look good? Not even remotely. Was it delicious? Hell yeah it was.

You know what else is delicious? Chocolate chip cookies.

These cookies were awesome. I put them in a box and they stayed soft and chewy for the whole week and a half it took to finish them. You can’t go wrong with cookies! I mean, next time I make them, I’ll add a bit more salt, and maybe a little more maple syrup. But they were still great.

Confession: I put ridiculous quantities of garlic into absolutely everything I make. Because of this, when I came across the phrase “roasted garlic soup” in something I was reading…I immediately had to try it.

An enormous quantity of roasted garlic, some fried minced garlic, vegetable broth, herbs, a splash of cream, and bam! Soup! It was awesome. (I can’t remember if I included chopped onion or not. I don’t think I did? But I put onion in almost everything, so it’s hard to be sure.)

I almost always make avocado toast on fried bread. Sometimes, I include cheese or onions. This time, I had a bit more time, and I wanted something a little different, so I tried it on garlic bread instead, with crispy cheese. 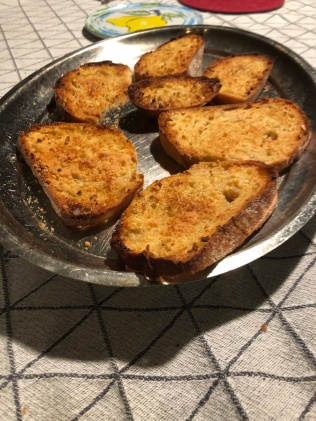 I like to cook. But I’m really not often fond of recipes that take a whole lot of time or need precise measurements. I’m a fan of things that I can throw together quickly and get a tasty result. But when you’re sitting at home under a low buzz of anxiety, sometimes you need some foods that are a little more involved – so I made pierogi. They are not pretty, but they survived and they taste good. 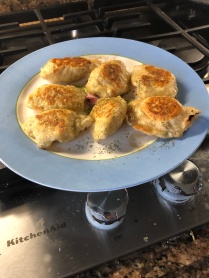 They had a potato and cheddar filling. I boiled all of them, then fried some and froze the rest. They defrosted surprisingly well, too. I only had trouble with two of them – those two got stuck together and one tore when I tried to separate them. Luckily, they’d already been boiled, so frying them went fine.

And because we’re in quarantine…I think it’s time for the obligatory bread pictures: 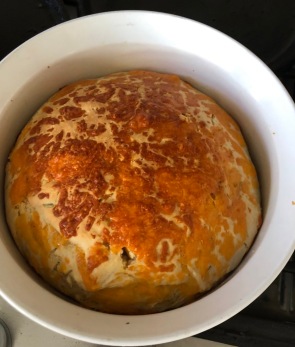 The one on the left is garlic pull-apart. The one on the right is cheddar rosemary. The dough for both was your basic bread dough, plus the add ins. Like the cookies, this also needed a bit more salt. Other changes I’d make for the garlic one would be to add more butter and maybe even whole roasted cloves, instead of minced garlic. For the cheddar rosemary, I’m thinking jalapenos. I can never stay away from that flavour combo for too long.

I’ll probably post the recipes later. How’s everyone holding up in quarantine?